(Reuters) – Israel destroyed a 12-storey tower block in Gaza housing the offices of the U.S.-based Associated Press and other news media on Saturday, saying the building was also used by the Islamist militant group Hamas.

The al-Jalaa building in Gaza City, which also houses the offices of Qatar-based broadcaster Al Jazeera as well as other offices and apartments, had been evacuated after the owner received advanced warning of the strike.

A Palestinian journalist was wounded in the strike, Palestinian media reported, and debris and shrapnel flew dozens of yards away.

The Israeli military said its fighter jets struck a multi-storey building “which contained military assets belonging to the intelligence offices of the Hamas terror organization”. It said it had provided advance warning to civilians in the building, allowing them to get out.

AP President and CEO Gary Pruitt called the strike “an incredibly disturbing development.” He said a dozen AP journalists and freelancers had been in the building and had been evacuated in time.

“We are shocked and horrified that the Israeli military would target and destroy the building housing AP’s bureau and other news organizations in Gaza,” he said in a statement.”The world will know less about what is happening in Gaza because of what happened today.”

The U.S. government said it had told Israel to ensure the safety of journalists.

“We have communicated directly to the Israelis that ensuring the safety and security of journalists and independent media is a paramount responsibility,” White House Press Secretary Jen Psaki tweeted.

U.S. Secretary of State Antony Blinken spoke with Pruitt on Saturday evening and “offered his unwavering support for independent journalists and media organizations around the world,” a State Department spokesman said in a statement.

“The aim of this heinous crime is to silence the media and to hide the untold carnage and suffering of the people of Gaza,” he said in a statement. 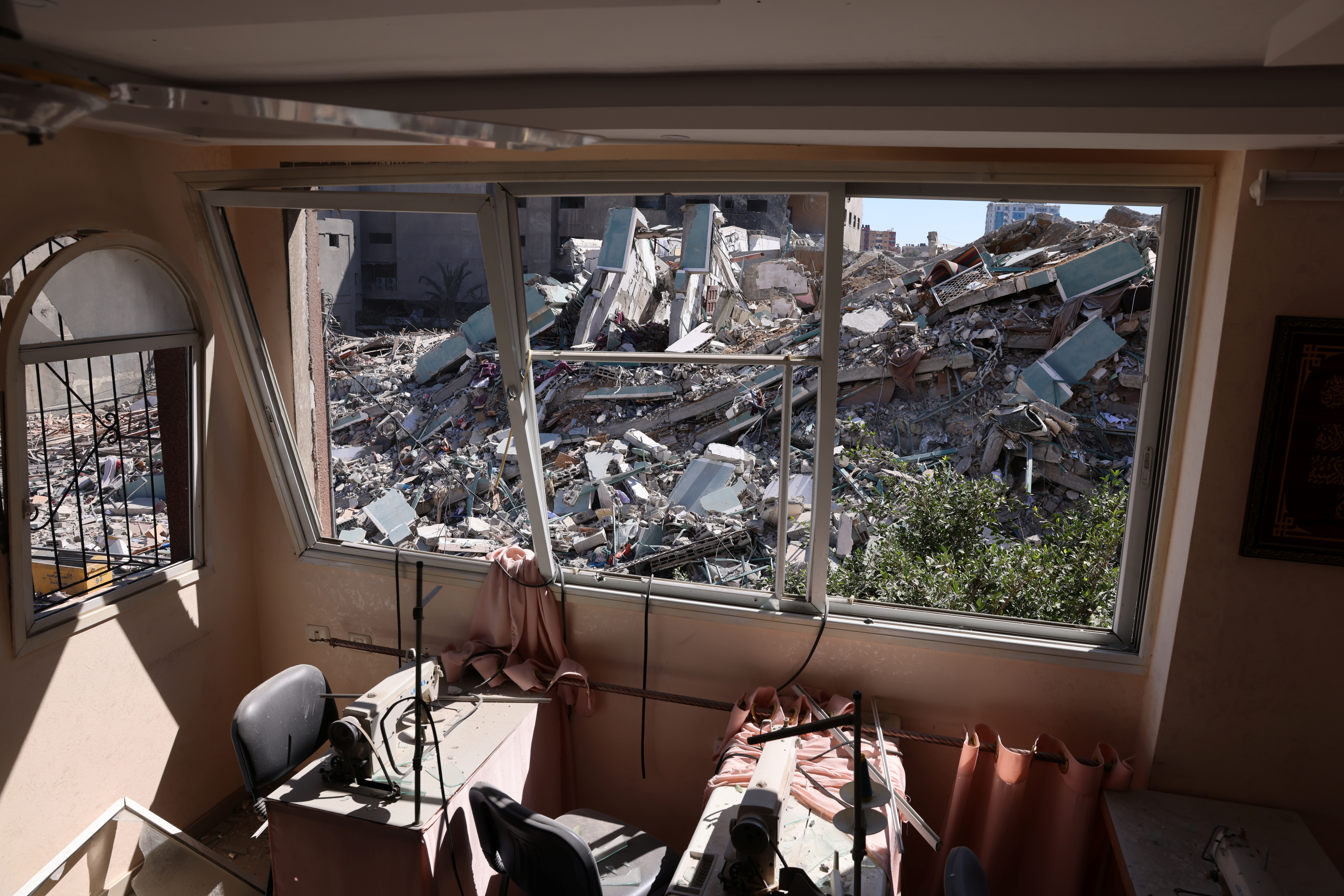 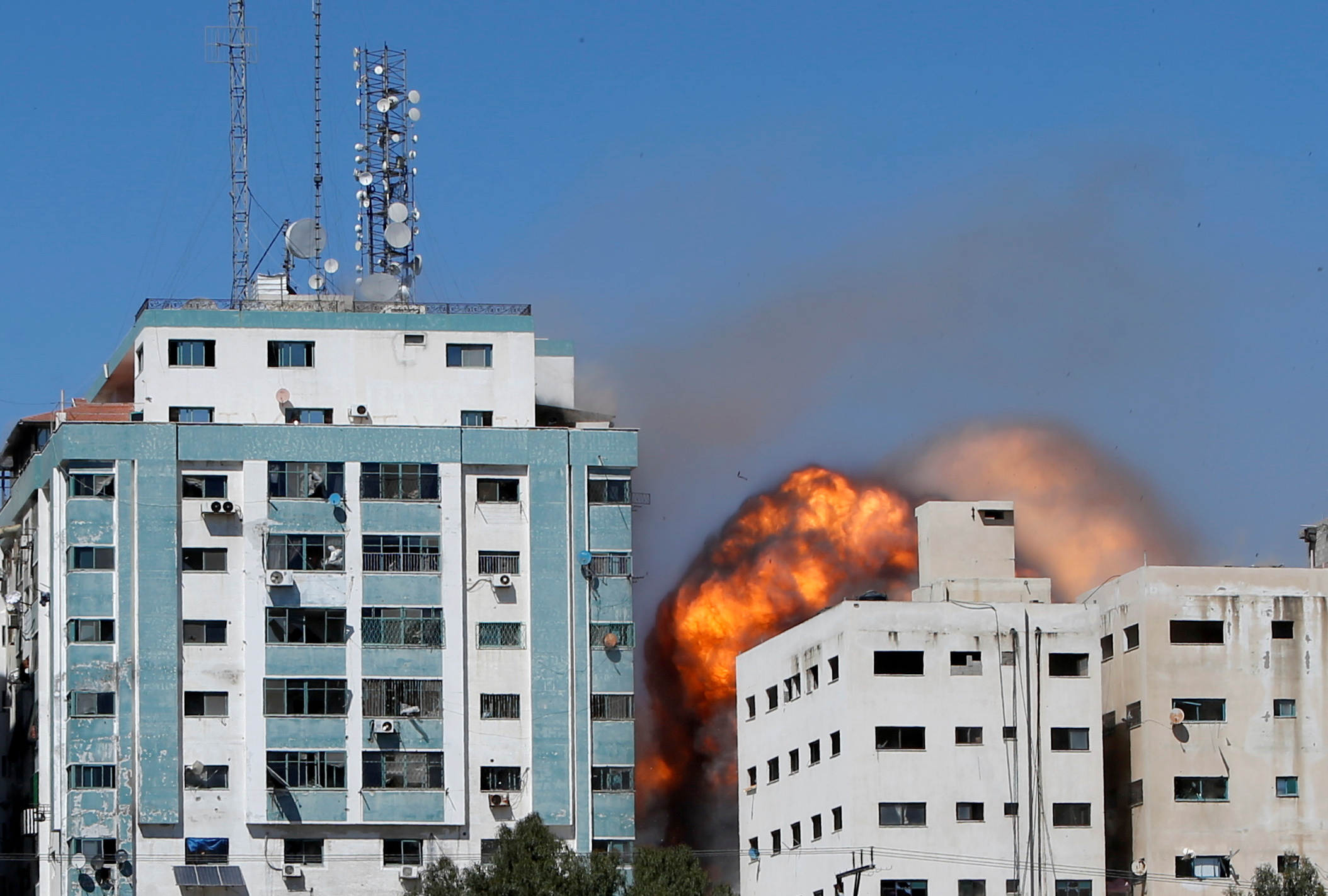 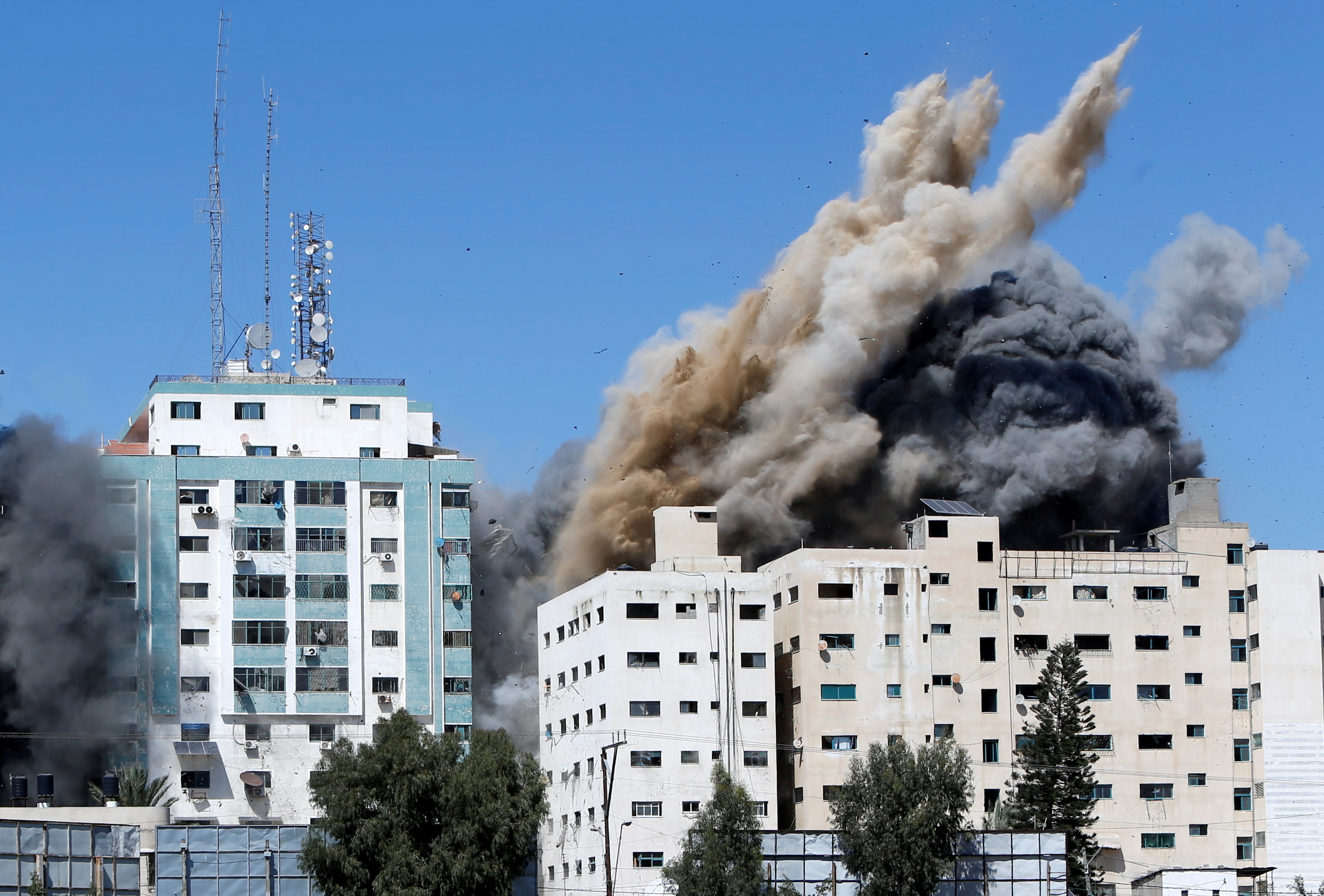 Israeli military spokesman Lieutenant Colonel Jonathan Conricus rejected the notion that Israel was seeking to silence the media. “That is totally false, the media is not the target,” he told Reuters.

Conricus called the building a legitimate military target, saying it contained Hamas military intelligence. He said Hamas might have calculated that by placing their “assets” inside a building with news media offices in it “they probably hoped that would keep them safe from Israeli attack.”

The Israeli military has said during nearly a week of intense conflict that its strikes on buildings in Gaza are aimed at hitting targets used by Hamas, the Islamist group that runs the enclave.

Hamas militants have fired more than 2,000 rockets at Israel during the latest violence. Palestinians medics say at least 140 people, including 39 children, have been killed in Gaza. Israel has reported 10 dead, including two children. read more

The destruction of the building came the day after U.S. President Joe Biden’s envoy Hady Amr arrived in Israel amid diplomatic efforts to restore calm.

Israeli Prime Minister Benjamin Netanyahu told U.S. President Joe Biden in a phone call that Israel is doing everything to avoid harming non-combatants in its fighting with Hamas and other groups in Gaza.

Netanyahu said proof of this was that during recent Israeli strikes on multi-storey towers “in which terrorist targets were attacked by the IDF (military), the non-combatants were evacuated”, a summary of the phone call released by Netanyahu’s office said.

The Washington-based National Press Club said Saturday’s strike on the Gaza tower had followed “bombing by Israeli warplanes of two other buildings housing more than a dozen media outlets” on May 11 and 12.

“This trend prompts the question of whether Israeli forces are attacking these facilities to impair independent and accurate coverage of the conflict,” the group said in a statement.

An Al Jazeera report on the strike on its English-language website quoted journalist Safwat al-Kahlout as saying: “I have been working here for 11 years. I have been covering many events from this building, we have lived personal professional experiences. Now everything, in two seconds, just vanished.”

Tensions could escalate to ‘full-scale war’ between Israel and Palestine: UN

We use cookies on our website to give you the most relevant experience by remembering your preferences and repeat visits. By clicking “Accept All”, you consent to the use of ALL the cookies. However, you may visit "Cookie Settings" to provide a controlled consent.
Cookie SettingsAccept All
Manage consent

This website uses cookies to improve your experience while you navigate through the website. Out of these, the cookies that are categorized as necessary are stored on your browser as they are essential for the working of basic functionalities of the website. We also use third-party cookies that help us analyze and understand how you use this website. These cookies will be stored in your browser only with your consent. You also have the option to opt-out of these cookies. But opting out of some of these cookies may affect your browsing experience.
Necessary Always Enabled
Necessary cookies are absolutely essential for the website to function properly. These cookies ensure basic functionalities and security features of the website, anonymously.
Functional
Functional cookies help to perform certain functionalities like sharing the content of the website on social media platforms, collect feedbacks, and other third-party features.
Performance
Performance cookies are used to understand and analyze the key performance indexes of the website which helps in delivering a better user experience for the visitors.
Analytics
Analytical cookies are used to understand how visitors interact with the website. These cookies help provide information on metrics the number of visitors, bounce rate, traffic source, etc.
Advertisement
Advertisement cookies are used to provide visitors with relevant ads and marketing campaigns. These cookies track visitors across websites and collect information to provide customized ads.
Others
Other uncategorized cookies are those that are being analyzed and have not been classified into a category as yet.
SAVE & ACCEPT